The Warriors were desperate for a way to change the energy surrounding a team that has lost nine of eleven and five consecutive games.

Steve Kerr’s rah-rah speech was absent. No expletive-filled lashings from DraymondGreen. Golden State was instead visited by Will Ferrell. Jackie Moon to be exact.

Chase Center was graced by the comedy king, dressed in his full movie costume. “Semi-Pro.”Before the Warriors’ 112-97 win over Los Angeles Clippers, he met up with them and spoke to them in their locker room.

Klay Thompson’s love of “Semi-Pro”This has been well-documented. The Warriors star, who had been in a terrible slump, was shocked when Ferrell came onto the court to warm up. Thompson scored 20 points in the win and spoke afterwards about Ferrell’s influence on his game. “Semi-Pro”During two long rehabs, he was able to get through the difficult times.

Klay: “During my rehabilitation, when I would have some dark days I would put [Semi-Pro] on and it would make me smile” ð¥º pic.twitter.com/nxZ94sKQ6z

“That movie, Semi-Pro, during my rehabilitation, when I would have some dark days, I would just put that movie on and it would make me smile. I’m very thankful for that film,” Thompson said after the game of Ferrell.

What Ferrell’s comedic genius did to lift Thompson’s spirits during his moments of doubt and anger, also worked Thursday night on a Warriors team that has been in a free fall for the past month. It was obvious the presence of Jackie Moon helped take a weight off Thompson and the Warriors.

“That was so much fun,” Thompson said of having Ferrell around pregame. “That was some of the most fun I have had on the court this year. I am very appreciative that Will could come out and lighten the mood, especially after the losing streak we had. I’m not going to say he’s responsible for the win tonight but I think he was a huge catalyst for why we came out guns blazing. He’s a legend.”

Steph Curry echoed Thompson’s sentiments, commending Ferrell for the “vibes” he brought to the down-on-their-luck Dubs.

“It was fun, and I’m glad we took advantage of it, but … we lost like four, five straight, you add that to the mix, get a little distracted, but we fed off the energy,” Curry said. “I was actually surprised about his form — he actually had some good rotation on the ball. Endless energy. … I thought it was just going to be a couple minutes and just messing around, but he gave it a full warm-up session, [and] he was out there doing everything. He gave us a riveting speech before the game in our team meeting. It was good vibes, he’s obviously hilarious, so he brought it today.”

Ferrell’s visit to Golden State was the actor’s idea. Head coach Steve Kerr told reporters postgame that Ferrell emailed him and the two came up with the idea executed Thursday.

“He actually emailed me a while back and I didn’t believe it was him,” Kerr said. “So we exchanged a couple of emails and concocted the plan. He’s a huge Klay Thompson fan, and he knows how much Klay loves dressing up as Jackie Moon, so it was just a natural fit and felt like a good time to do it, just to make everyone laugh in a tough stretch of the season.

“He was great, he came into the locker room and made the guys laugh and everybody loved seeing him and hearing from him. He was hilarious. It was just something different to do.”

In search of anything to help stem the tide, Kerr turned to a Flint Tropics legend to loosen his team up and get them to exhale with the postseason approaching. It was a move that shows Kerr, for all the heat he takes, knows how to manage a locker room and understands the importance of supporting your players beyond the Xs and Os.

Kerr clearly knew that meeting Ferrell as Moon would lift Thompson’s spirits and would mean a lot to the struggling star.

The plan was successful Thursday as the Warriors put the clamps on the Clippers to snap their losing streak. Now, it’s up to Kerr, Thompson, and Curry to keep the good times created by Moon’s visit going. 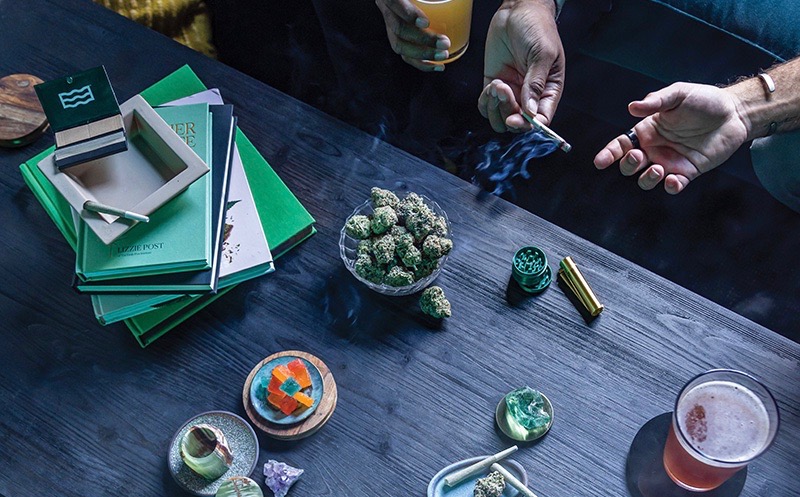 Hazel Park Is Setting a Standard for Marijuana Businesses The status of medical cannabis licenses in Maryland