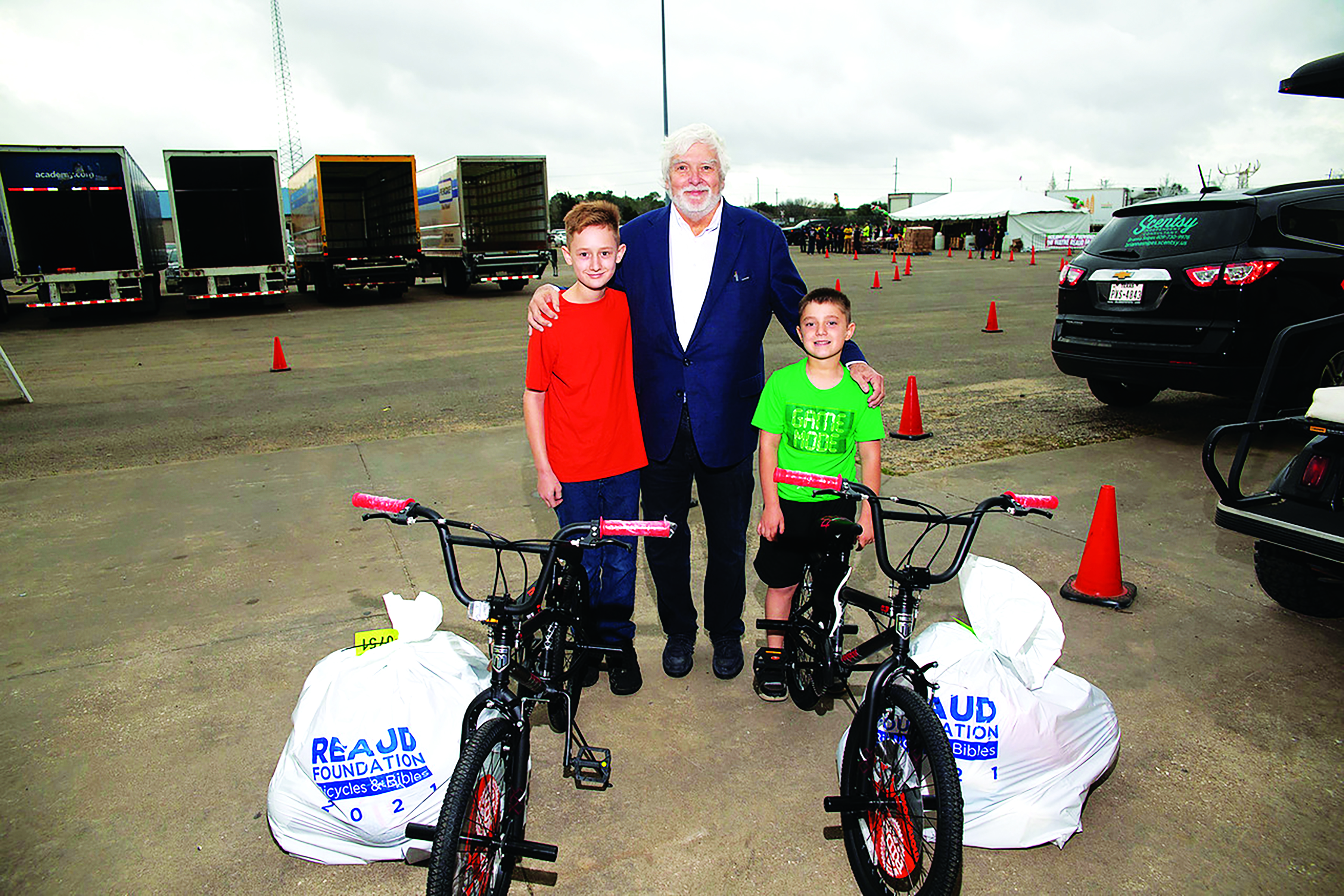 Her mother was taken by the COVID-19 pandemic just two months ago, but a Beaumont 5-year-old told her 23-year-old sister/soon-to-be adopted mom that Christmas 2021 was the best she’s ever had – all thanks to the Reaud Charitable Foundation’s annual Bicycles and Bibles event.

LeAnne was one year old when Wayne A. Reaud gave away bikes at Beaumont Civic Center in 1999. As she grew, so too did Bicycles and Bibles’ giving, from 125 bikes and Bibles to 1,000 bikes, Bibles and other gifts each year. Bicycles and Biblicals was there to help her become a mother – she had no idea what to do with her five-year-old son and barely had the resources to provide Christmas for her child.

Bicycles & Bibles allowed LeAnne to give a bike and a Bible to her little girl, as well as a bag full of gifts, to her boyfriend. Without the philanthropic actions of families like the Reauds in Beaumont, some of Southeast Texas’ smallest residents might go without Christmas altogether.

LeAnne, who was in tears, said, “You have no idea how much this means, oh my God. My boyfriend came in with all the gifts, and this is the best Christmas my little sister has ever had.”

LeAnne plans to adopt her sister in January, when a local court will approve the family’s petition. She couldn’t afford to give the 5-year-old a gift last year, and that was before becoming an extemporaneous parent. The Reaud Foundation was able provide a bike and Bible, as well as a large bag of gifts and Christmas dinner for the young family.

Bicycles & Bibles is a method of bringing joy to those in greatest need. On Saturday, Dec. 18, organizers presented evidence of their claim at the Ford Park Complex.

The recipients are often overwhelmed with gratitude, according to Christian Fellowship Church Pastor Rick White, who has volunteered at the event since its infancy.

White shared the story of another young family who almost lost Christmas this year. Both parents – in their 30s – suffered a “significant” loss of income and worried about providing Christmas for their three kids between the ages of 4 and 12 – a scenario the pastor says is all too common.

“They were wondering how Christmas was going to happen for their kids because there are three kids in the family, but all three got a really good Christmas as a result of Bikes and Bibles. They were concerned about any kind of Christmas  whatsoever for the kids. So, this was just a great blessing for that family, specifically.”

“It’s unbelievable,”Adolph was added. “Bicycles and Bibles, for us, is a piece of what Heaven would look like on earth. To take children who come from poverty or hard times and give them the best Christmas – that has to be one of the most radical acts of Christian kindness there is.”

For the past two decades – through devastating hurricanes, economic recessions and a deadly global pandemic – thousands of children have celebrated Christmas thanks to the months-long work of the Reaud Charitable Foundation. The organization – founded by Beaumont attorney and philanthropist Wayne A. Reaud – has orchestrated a colossal Christmas-present distribution event, bringing bicycles, Bibles and a sackful of gifts to 1,000 children in Southeast Texas each year.

Wayne’s brother, Jon Reaud, manages the holiday affair, and he told The Examiner he starts making Christmas preparations in February. After months spent ordering gifts, the Reaud Foundation delivered toys and food to 1,000 children within hours at Ford Park.

“We started 22 years ago with just a bike and a Bible and a stocking full of candy,”Jon Reaud is the executive director of Reaud Charitable Foundation. “It was really cold that first year we did it at the Civic Center, and we had about 125 kids. After that first year, Wayne said, ‘Look, we gotta get those kids coats.’ It was freezing.”

The Reauds’ Christmastime endeavor has snowballed to serve nearly tenfold the annual number of Beaumont children in its life. The foundation’s executive director estimated they’ve provided Christmas gifts to approximately 36,000 children in that time.

The foundation has always given bikes and Bibles to children, as the event title implies, but the Reauds decided the families’ Christmases should be a bit bigger each year. To this end, the group began to give Champion hoodies, Reaud Foundation tracksuits and London Fog parkas as well as T-shirts. Reaud’s giving acts inspired other Beaumont families to join in the merriment. The Jon Werner Family provides soccer balls for each child. The Glen Morgan Family shares 1,000 footballs and teddy bears each season.

Although organizers had to alter the event from the traditional, all-day party held indoors to the drive-thru, outdoor version implemented in 2020 thanks to the COVID-19 pandemic, the mass donation effort still ran smoothly, according to Young Men’s Business League (YMBL) 2018 Volunteer Chairman David Knight.

“The workshop”This year, things were also different. The usual group of volunteers that was scattered around the Ford Park Arena at stations which formerly featured balloon animals and face painting, was transformed. Since 2002, volunteers have guided recipients through Ford Park’s parking lot using food and gift station.

Families were treated to breakfast burritos from Carlito’s Mexican Restaurant and pizza from Little Caesar’s while snaking through Ford Park on the way toward the present-delivery station. Families were then given additional food just before leaving the complex, including a 25-pound turkey, a can of fruit and enough canned sides.

An army of volunteers, totaling approximately 300 local firefighters, YMBL members and high school students from Young Life’s ministry, buzzed around the main donation station, delivering Santa-sized sacks of toys into SUVs and trucks through hours of pouring rain. Each vehicle remained at the loading station for a maximum of two minutes.

Pastor Adolph expressed gratitude for the many hands that helped make the Bicycles and Bibles event memorable and memorable for the children. Mostly, he’s “thankful for the heart of my friend, Mr. Wayne Reaud,”Who initiated the innovative initiative?

Wayne Reaud said that he can still recall the day he received his first bike and how proud he felt about the gift. He said he treasured it and that he contemplated the goodness of God to him and his family. Then a thought occurred to him to share bikes and Bibles with children and teens all over the region.

“Trying to figure out a way to share those blessings spoke to my heart several years ago,”Beaumont lawyer and philanthropist, said: “I wanted to give children a new bicycle, to share something special with them from my past. And I wanted to give them a Bible because I believe that is where they will find the fundamental truth and a code to live by. So, not only are we able to bring a smile to their faces with the gift of a bicycle, we are also able to give them a small introduction to the Lord Jesus Christ.”

He often mentions Gena Reaud, his mom who died in March 2013, as the one that he credits for helping him and his brother to follow the Lord’s ways.

“She helped teach us compassion for others,” Wayne Reaud said. “Her teaching set the foundation from which this program sprang. I believe that if we can teach a child that the fundamentals needed for life are founded in the Word of God, he or she can formulate a code to live by each and every day.”

Reaud stated that he was inspired to create the annual Christmas program by a line from scripture. This was John 21, when Jesus told Peter. “Feed my sheep.”

“Every year the event has grown and now the foundation additionally is providing bicycles and all the other gifts to the local girls home, boys home,”Wayne Reaud explained how Wayne announced the event. “The United States is still the greatest nation on Earth and, when times get hard, we pull together and overcome the worst of circumstances through the best of mankind.” 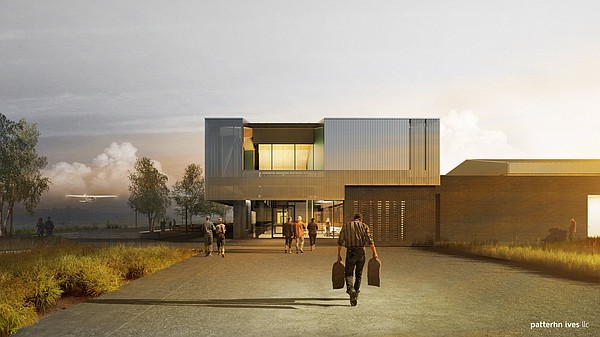